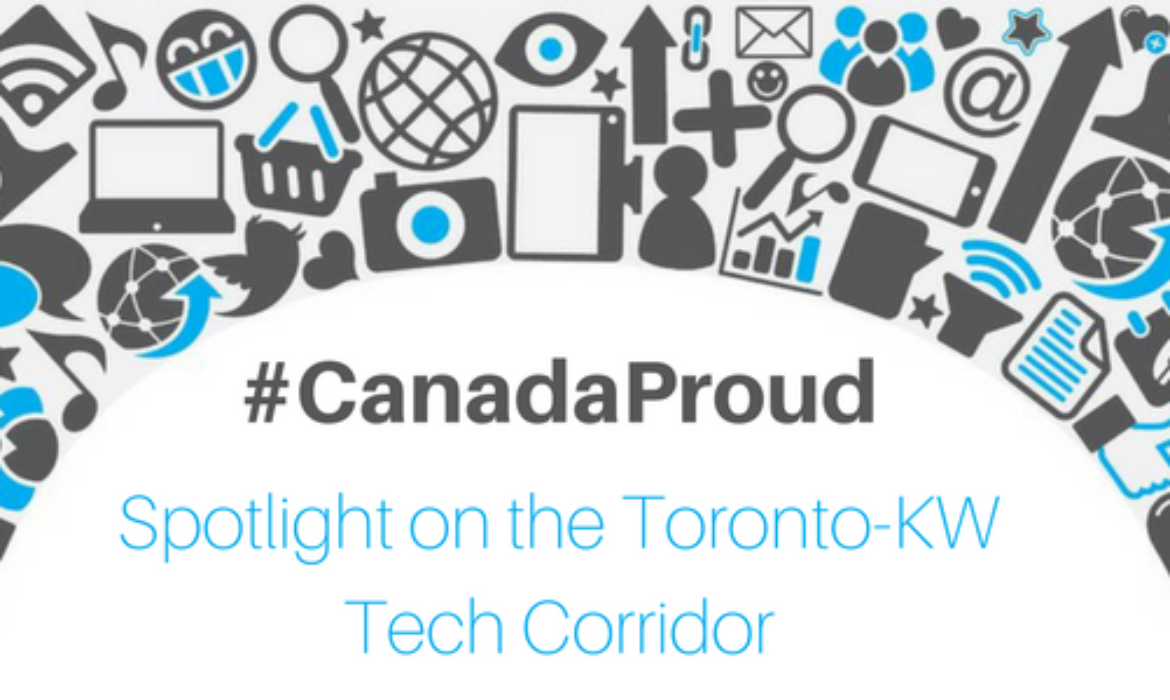 It boasts the country’s highest concentration of skilled tech companies and employees. It attracts top talent and investment capital from around the globe. It’s where you’ll find tech giants, like Google, and a swarm of competitive startups leading breakthroughs in biotech, artificial intelligence, and IT.

On paper, we call it the Toronto-KW tech corridor. Some dub it Silicon Valley North.

Whatever the name, we’re proud to be a part of Canada’s thriving technology hub.

The 112KM corridor between Toronto and Kitchener-Waterloo is the largest technology cluster in the country, representing 17% of our annual GDP and employing over 200,000 tech workers across 15,000 companies

It’s home to Canadian innovators like Blackberry, Shopify, and OpenText. But it’s not just homegrown Canadian companies driving growth in the corridor.

Last year, Google unveiled a new office in Kitchener with room for up to 1,000 employees. Ford is making sizable investmens in the province, including a research facility in Waterloo. The MaRS innovation hub near the University of Toronto houses workers from Facebook, Paypal, AirBnB, Autodesk, Etsy, and 200 startups.

So, what draws the tech world to our doorstep?

To start, the region is a wellspring of talent.

Our educational institutions are known worldwide for academic excellence. Many of Ontario’s 20 universities and 24 colleges are located right here in the corridor, offering extensive internship and co-op education programs to serve the technology industry. Over 38,000 students in Ontario graduate with degrees in math, engineering, or science each year.

One of the challenges we’ve faced is keeping these students here in Ontario once they graduate. In the past, many of Canada’s talented grads left to pursue opportunities in Silicon Valley. But that’s beginning to change. The public and private sectors are working together to fund technology entrepreneurship and innovations in Toronto-KW, fueling the creation of more jobs for skilled tech workers. Ontario invested $3 billion in such spending over the past six years, and the federal government has committed an additional $950 million to support clean tech, bioscience, and digital innovation in the future.

Not only have we made headway in stopping the brain-drain, but the Toronto-KW tech corridor is drawing global talent as well. More American citizens and foreign nationals are leaving the United States to work in Canada. Our vocal pro-immigration stance and strong investment in tech has made the corridor an attractive option for workers, and both universities in Waterloo region are reporting double-digit growth in international student applications this year.

A workforce as diverse as ours is a force to reckon with. As Prime Minister Justin Trudeau wrote on Quora, “Having a group of smart, capable people focus on the same problem from a range of different perspectives, backgrounds and lived experiences is much more likely to come up with great answers than a homogeneous group would.”

In addition to world-class academic institutions and research centers, the corridor has a number of organizations dedicated to supporting entrepreneurs. Waterloo region is fertile ground for startups, with over 5,000 budding companies growing there today.

For a glimpse at the future of Canadian technology, you need only step through the doors of the many start-up incubators in Kitchener-Waterloo. One such organization is the Accelerator Centre, an incubator dedicated to helping startups grow and compete on the world stage. Among its alumni are Trustpoint Innovation Technologies, a machine-to-machine communications developer that made Deloitte’s Fast 50 list; Magnet Forensics, which recently opened new headquarters in Waterloo; and yours truly, Trafficsoda.

The Toronto-KW tech corridor has a long way to go to catch up to Silicon Valley, but it’s on track to become one of the foremost innovation hubs in the world.